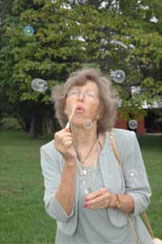 When I was five the family moved from London to the country. We eventually moved back and I worked in London before coming to America, where I met my husband. After our daughters were born, divorce, an Economics degree from SUNY Purchase and a lifetime in Accounting, I finally discovered what I want to do when I grow up – write.

I started writing in 1990 and have been reading around the Hudson Valley poetry circuit locations – being the Featured Reader at several of them. Not Henry Hudson is included in Water Writes, the Hudson River anthology published by Codhill Press, edited by Laurence Carr, and “My” Statue of Liberty appeared in The Renaissance Reader.

I am working on a sequel to My Snippets, My English Snippets, and have also almost finished the first of what is hoped to be a series of historical novels.

Send me a note: